Well, on that Friday when I wrote about all my plans, I really did start on the redo of the moss house number (read about how that went here). And then I was on a roll! I spent Friday evening and Saturday morning collecting three banana crates full of rotting wood from a convenient and very large pile just round the corner of our house, and on Sunday joined forces with my SO to build a rather improvised, experimental, smallish but supercool hugelkultur bed. And planted some stuff, which was probably too early, but first things first.

Some thoughts I’d been having

I wanted to do this for all sorts of reasons:

So I collected from my seed stash and the kitchen everything I liked and seemed to fit in (mostly marigolds, very old seeds of unknown kind and origin, pumpkin of course, popcorn, Alb lentils (a special local heirloom sort) and golden linseed) and told the rest of the family to bring me two or three kinds of vegetable seeds that they liked. They came back from the weekly shopping trip with cucumber and radish seeds (from Bingenheimer Seeds, biodynamic and all), and then there were my potato plants and a thriving young courgette plant that had come my way and seemed a good idea to buy the week before.

So how does that fit together?

I’d read enough about companion planting to start wondering about what should go where and with what else, so I did some research on the plants I had on hand. The internet isn’t always in agreement on these things, but this much I could ascertain:

At that point I went shopping again to see if I could get nasturtium and borage seeds. Sadly, the organic supermarket we frequent had mostly vegetable seeds and not those two, but since I was there anyway I thought I might as well add another nitrogen fixer – and besides, how could I possibly not buy seeds called “Miracle of Kelvedon”? (It’s a kind of pea.) We bought sunflower seeds and the flower mix from BayWa, which is more conveniently just a little down the road BUT sells Roundup as if this were a completely normal thing to do (which made me afraid that it is, which in turn freaks me out), so I don’t usually buy from them if I can help it.

So the plan was to build the bed running from north to south, make the west side the squash side and the east side the potato side, with all the rest distributed freely. I also thought this probably wouldn’t work out perfectly from the start anyway, so there’d always be room to wedge in some nasturtium and borage later.

This last thought received some consolidation when later on one of the locals told me that most of these plants and seeds should usually not put out before the end of May. Okay… but I was therenow anyway and as I said before, it was meant to be an experiment. So we started digging.

The ground held some surprises for me: Down to a depth of about 40 cm there wasn’t a stone to be found – but the digging proved to become more difficult with every centimetre, for the subsoil was very clayey. How cool! No stones and plenty of clay. Fabulous. According to what my auntie (who’s been living on the plot next to ours for a long time) said there’s a strong likelihood that it’s like that everywhere, so we chose not to dig test holes every few metres yet.

Another small surprise was a root encounter from a tree that was quite some distance away. That led me to worry about the roots of the ash tree at the road – it might give us some difficulties building the foundations where we want them. But it’s the only tree on the plot and I love this ash tree, so we’ll just have to work something out.

Then we put two of the banana crates together to see how big the hole should be, and realised instantly that we had far too little wood really. So my SO had the rather brilliant idea to just leave the wood in the two bottom crates and place the contents of the third on top. Of course this means we buried a lot of air pockets in the bed, which is probably good for the composting process but also means that it’ll shrink quite a bit at some point. Once again, it’s learning by trial and error!

On top of that we put some fresh organic waste and cut greens to our liking, poured a lot of water over it, and covered it with a layer of wet paper. The next layer consisted of the dug out bits of topsoil with the grass turned to the inside – we had to dig up some more, making another hole, because it wasn’t enough – and the vermicompost on the southeastern part. Oooohhh that stuff was lovely!! Perfectly crumbly, black as soot, glistening with moisture, and teeming with worms. Divine, I tell you.

On top of that we then distributed the clayey subsoil from the hole until most of the green bits were covered, then I wedged in the plantlets, put in the big seeds and scattered the little ones all over the place willy-nilly, improvised a watering pot with one of trusted yoghurt bins and wetted it all down once more. And finally I covered the whole thing in a generous layer of straw mulch with some broken clay root tiles to hold it down a bit – and also as a bit of thermal mass (Sepp Holzer and his “stone strawberries” have firmly lodged themselves in my brain).

And now: The whole story in pictures 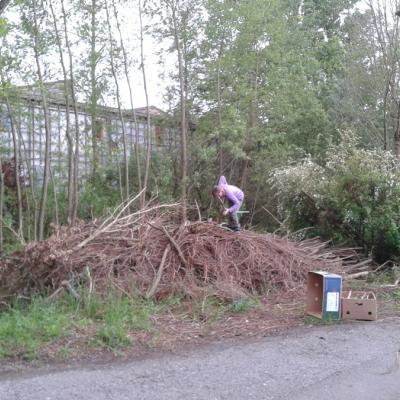 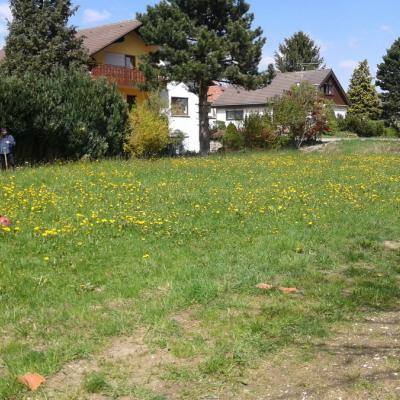 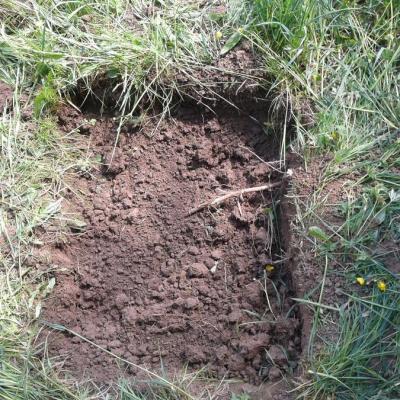 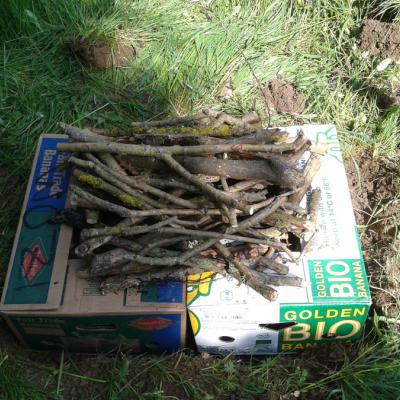 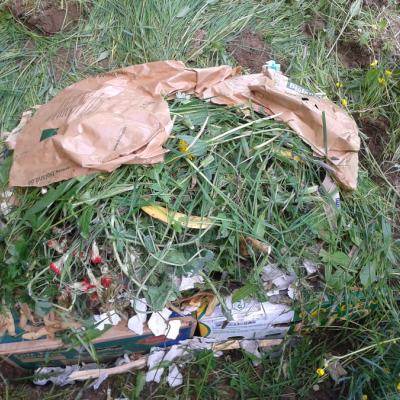 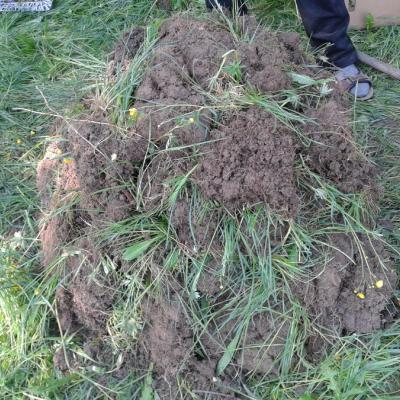 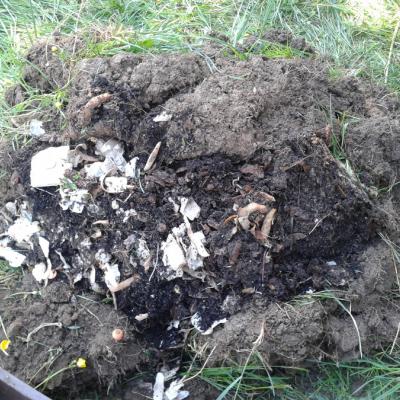 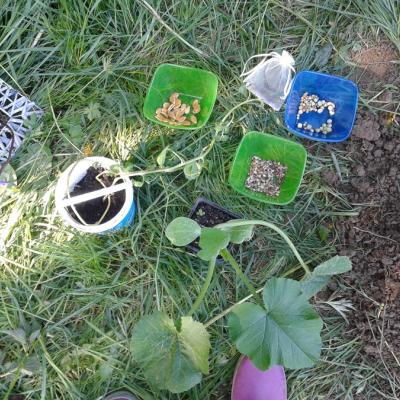 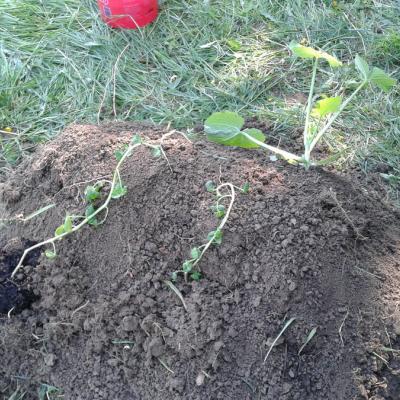 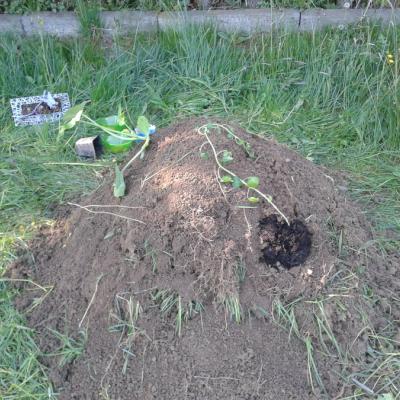 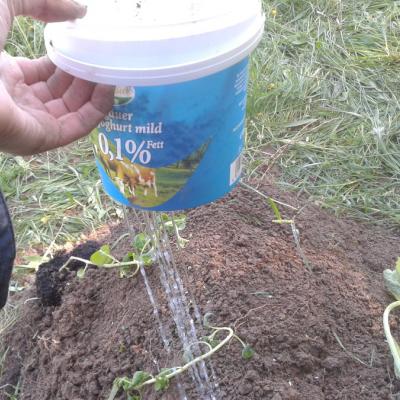 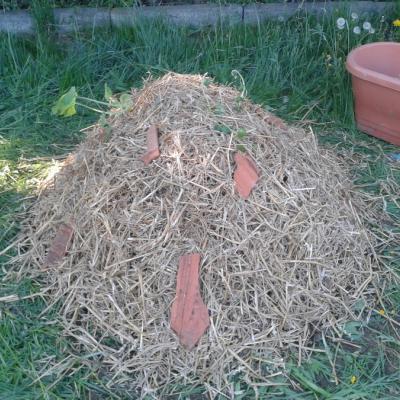 The end of the story…

As we drove home, happily tired after a long day, I suddenly realised that I had completely forgotten to bring the newly bought sunflower, cucumber AND radish seeds. Noooooo…! But no matter, I was going to check up on the bed and do some more planting anyway. So of course I searched the internet the next day and finally decided to order directly from Bingenheimer – and well, for one thing they do have a fantastic seed collection to choose from and for another, the shipping costs were fairly high, so I let myself get carried away a tiny bit: with non-climbing nasturtium, a small kind of sunflower, an absolutely gorgeous (tall) kind of sunflower called “Velvet Queen”, borage, bantam corn (of course!), golden poppy (because it’s so lovely), sage (I totally needed that too), a flower mix called bees pasture (yeah), and a water melon (…). And they threw a packet of marigolds in with the order, which I think was very nice too.

… and the beginning of a new one!

So I’d only just started to miss my plants in the kitchen when my daughters and I caught the planting fever. We now have our only southern window beleaguered by boxes full of toilet rolls and egg cartons filled with soil and seeds of all kinds, and we’re most excited to see if and what will grow. Oh, and one of those is a giant seed (see picture) – can you guess what that is? 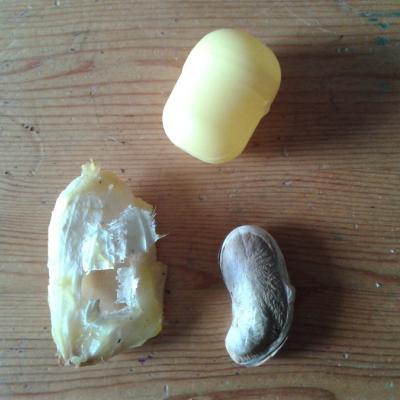 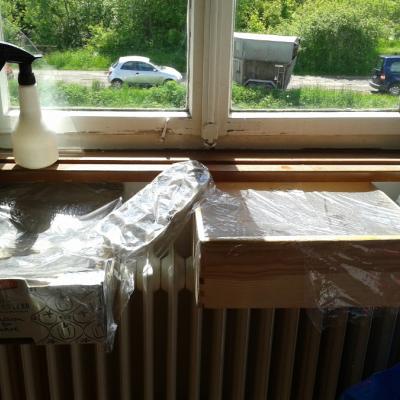 Ha, just now while spraying them I discovered a sweetcorn seed with a protruding root. Yay yay yayyyy!!