The whole thing in a nutshell

This house and its surroundings are a way that I can make this work for me and my family.

About me (that is, the one who is writing) 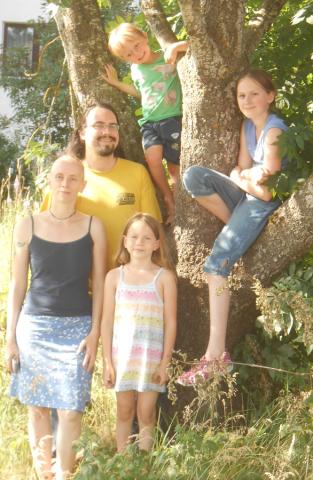 I’m Anna, born in 1980, mother of two girls and a boy (born in 2004, 2007, and 2011, respectively), eco freak, neopagan (find me in the Reclaiming corner), webwitch, and general geek. Alright, so I identify as a lot of things! Oh, and I do have little money – by and large. Even if I wanted to and started saving right away, I wouldn’t be able to afford a “normal” house in a very long time.

I live in an area known as Swabia in southwestern Germany, in a tiny rural village called Heinstetten (check it out on OpenStreetMap). And I want to build a house all on my own, with cob (mostly), which is almost unknown in Germany.

By now I’ve managed to convince my family to hop on the cob train, so to speak, so I’ll mostly be using “we”. However, I would like this WE to involve a couple more people! So is anyone (preferably another mother with a kid or two) interested in joining us?

About this house project 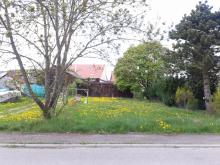 So we want to build a cob house, the challenge mostly being doing this in Southwestern Germany, where you’re not supposed to be doing things for yourself and the building regulations are a little more demanding than in the UK. But I should also add that the house comes with an outdoor kitchen, a permaculture garden and greenhouse attached – or rather, that the whole project is a permacultural setting, with a particularly interesting bit being the house. And would a reed bed for greywater treatment be a part of the house (belonging to its technology) or a part of the garden (because of where it is), anyway?

You can find a short summary of how it all started and what’s been happening at the project page.

What is cob, by the way?

In a nutshell, cob is a mixture of clay, sand and straw that can be used to build load-bearing walls without any other means of support. But I’m not repeating things here for English-speaking folks, since you can simply read Kate Edwards’ good introduction to cob. Or go search the internet, there’s loads out there.

And if “mud house” makes you think “earthen mound with a cruddy door and no windows”, or something similar, check out my pinterest cob house inspiration board for a gorgeous peek of what cob houses can look like. Or if you’re not on pinterest, see some here:

So I’ve started this site fairly early in the planning stage; that is, October 2013. Partly I’m simply keeping it to make sure I’m documenting, like, everything. But I also wish to make this a model project for others, to encourage and inspire people, to show what’s possible if only you bring enough faith and determination to the table. And since it seems to me that there’s a big language barrier in the way of getting this owner-builder idea to Germany, I’ve decided to make this whole thing bilingual. That’s not to say I’m translating every post, rather I’m writing the basically same thing twice, starting with either English or German. (And then I go back during writing the second because new ideas have popped up and… you get the idea.) I currently manage to post something every other week or so while we’re still in the planning stage, and hopefully I can post at least every other day once building has started.

I’m really curious! Who are you, dear reader? Especially if you don’t happen to be one of the many people around me who asked me to keep them updated somehow, but rather, like, an internet stranger (whooooo), please feel free to comment somewhere or send me an email to anna (wonky a) erdhaeuschen (dot) de. I’d love to hear from you!