Yeah, well. I’ll try to keep this one short and get it online as quickly as possible instead.

Much has happened in the last year, not much in regards to my building plans and wishes though. Family life had been keeping me super busy already, and then the whole Corona chaos happened right on top of that. While I really can’t complain personally, it still has been the wildest ride! And I feel like I have hardly had a moment to catch my breath for months now.

A short note only today so I get back into blogging: On Saturday I got to talk with interesting people about living in an intentional community. And I noticed that not everybody seems to be talking about the same thing here. 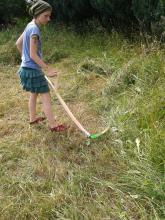 I spent two days in Frankfurt (Main) on an absolutely wonderful and VERY informative tadelakt course! I’ve been in love with the material for quite some years, but now we’re getting married ;-) plus I found so much inspiration and I have SO many new ideas!