Five and a half days with a mini digger

So on Monday morning I was expecting the mini digger, super excited, but it didn’t turn up. I called to learn that it wouldn’t be available until Tuesday afternoon for some reason. But I’d already planned on some diggering and I wanted to get going – hey, if there’s one thing I learnt this week, it’s this: here in this village, anything I could possibly need is going to be lying around somebody’s place. So it just so happened that I could borrow somebody else’s mini digger, which was really a stroke of luck, because I ended up returning it just yesterday morning.

First and second day: Make some holes and learn

On Monday I started to simply dig a hole in the ground where the foundations for the outdoor kitchen should go, figuring out how to operate a mini digger. To be entirely honest: I wasn’t too sure about this originally. But now I can definitely join in the chorus of all the people who told me it was dead simple: it is, and also quite fun. I totally underestimated the learning phase though – you really do need to concentrate a lot, and on Monday evening I had half a pit, a pile of sand, and a major brain jam. I found it mentally very exhausting, to a point where I felt like I had better stop working with the digger and call it a day. Plus I completely forgot to take pictures.

I also had completely unexpected help from a dear friend who happened to have some free time on his hands and came over to lend a hand. So there were two men (plus one sandbox child) to fetch and shovel two trailer fills of sand, which was a really good thing. (A trailer full of sand amounts to about half a tonne.) On that day I also realised that excavation with a mini digger tends to be much faster than taking the material over to the respective pile by wheelbarrow, depending on how far away the pile is. Since on Tuesday there was nobody there anymore to push that wheelbarrow, I ditched it and instead dumped everything onto the trailer. Easily done in twenty minutes with the digger – but then I realised that I can’t push a trailer filled with soil by hand very well, I’m just too lightweight and lacking in muscle power. So I resorted to shovelling, got me some blisters on both thumbs and thought long and hard about some better solutions (at least there was plenty of time while shovelling). These were, in effect, some new piles close by where I could quickly drive the digger over and dump material directly onto. Also on Tuesday I finished the pit as best I could with the mini digger (the corners are really tricky and hard to do nicely), so I proceeded to scratch at the uneven surface of my sister’s lawn a bit. 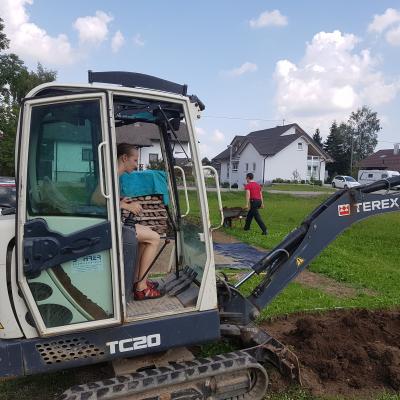 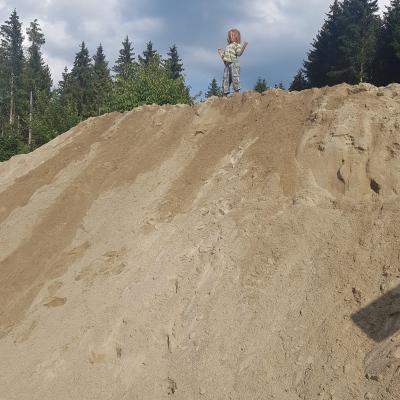 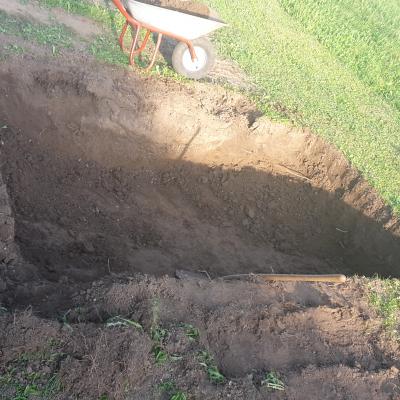 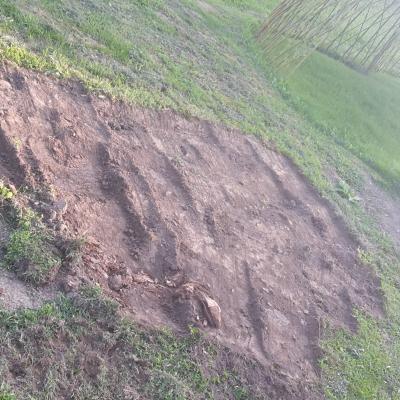 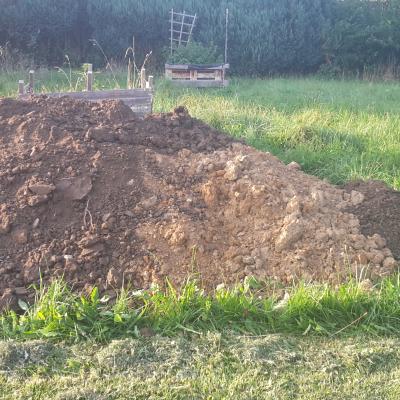 On Wednesday my sister had returned from a two week holiday, and also very unexpectedly another set of helpings hands turned up in the form of a friend of hers, who then spend half the afternoon with me in the pit, hacking and shovelling out the corners and carting them off with the wheelbarrow – which of course also took a lot longer than I had factored in or would like to accept. Still, at some point the whole was shaping up nicely enough, and I took a long long time thinking about where and how to best mix the cob with the mini digger. As a matter of fact space was quite restricted (I am so glad I have that experience now, need to figure something out before starting on the house!), and Tuesday had taught me that working efficiently with the digger meant having all the piles within its reach. Finally I decided to try mixing in the freshly dug pit, but with a tarp at the bottom to hopefully prevent digging up new soil by mistake and messing up the mix. So I experimented and mixed and tried things for a while, and at the end of the day nothing was finished and I had a feeling that this wasn’t really working out at all. Ugh. I then read a few articles on the internet about how other people had done this, and went to bed super exhausted (as I did every night of that week). 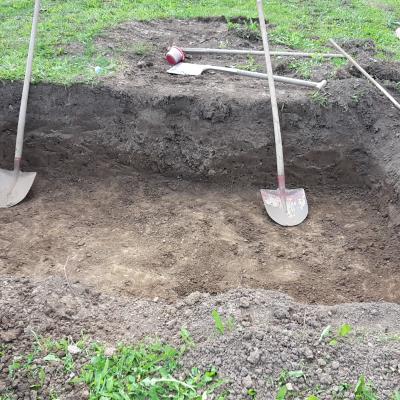 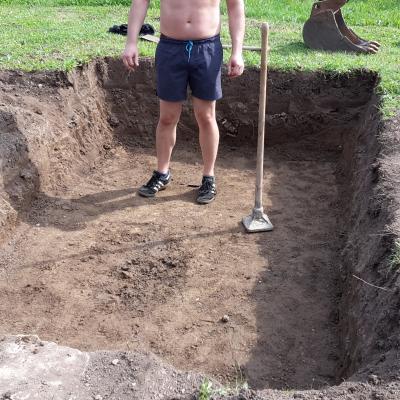 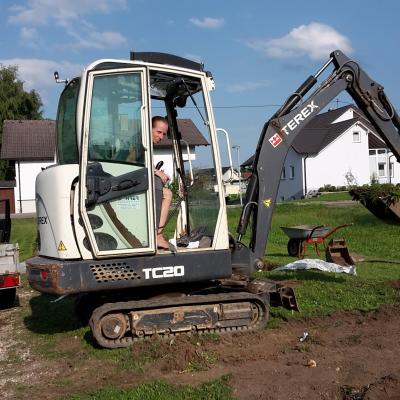 On Thursday morning I somehow thought mixing a batch of cob by foot to work out the correct clay to sand ration would be a good idea, so I would now how much to put into the pit afterward. I had neglected to soak the clay soil, however, but I thought it’d work out alright with dry clay and more water. That was a shitty idea… so I again spent quite a bit of time fumbling around, until I finally realised that I needed to radically change my thinking. What I had gathered from all the internet research the night before was: if you decide to use heavy machinery at all, absolutely use it for everything. Do not shovel anything by hand, do not tread anything with your foot, and start to think a LOT bigger. Quantity is key! Otherwise it’s just not worth the hassle (and the fossil fuels you’re burning). Because this is the one thing that such a huge, environmentally monstrous digger that I first off needed to learn how to use has going for it: you really can mix cob a hundred times faster. (Once you’re good at it – I may have done it only fifty times faster this time.) And if, like me, you don’t weigh enough to impress a roll of cob anyway, this absolutely saves you huge amounts of time AND energy.

So on Thursday afternoon I radically changed gears and pulled the tarp out of the pit. Using the mini digger, of course, because by then there was a lot of material piled on top (that worked out really well, just wrap it around the head and pull). Then I shovelled (with the digger!) a lot more sand onto that pile, layering it with clay which I had soaked in the meantime, roughly in a 3:1 ration. Water on top, and then mix and knead, mix and knead. Until I really could move the digger head like a giant spoon working a massive amount of dough, and the consistency of the “dough” got better and better. I did adjust the mixture proportions a bit, totally by gut feeling, and on Thursday night a had a clay-sand-mix that felt quite right. I’d say that was the day I finally got a good grasp on using that digger. 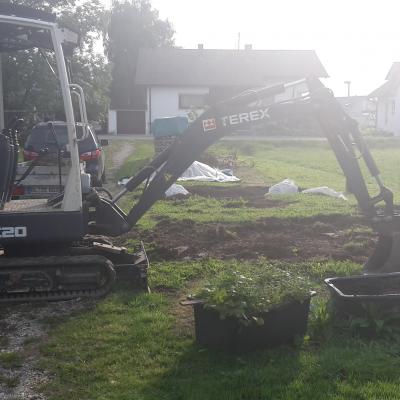 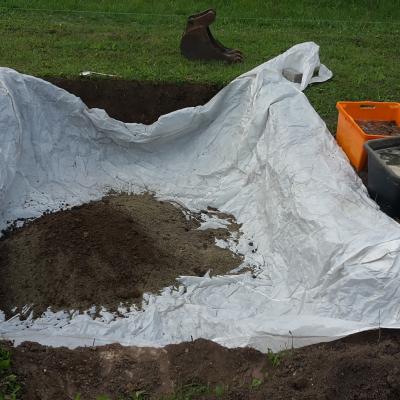 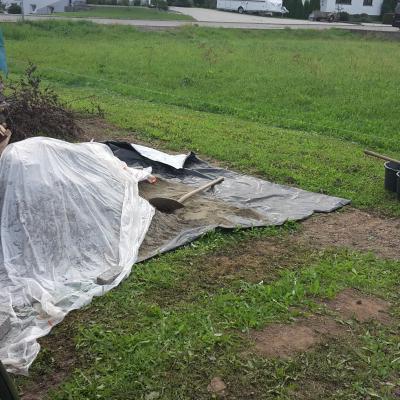 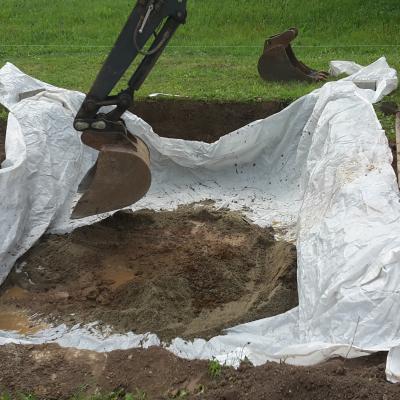 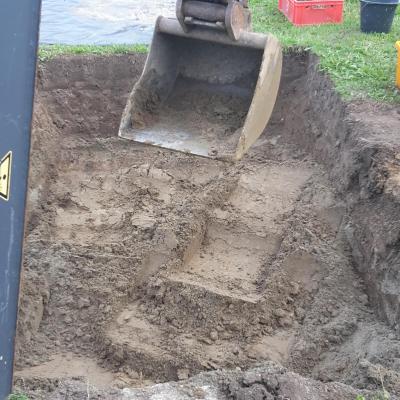 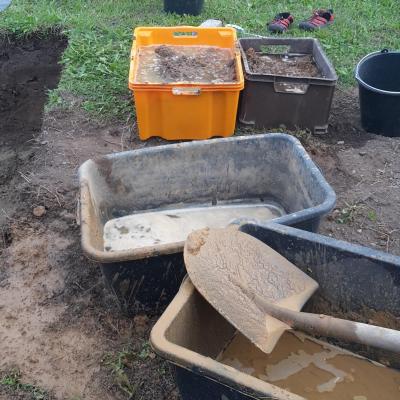 On Friday morning I eagerly started work, aiming to have the cob ready, the digger back, and ideally the rest of the lawn levelled by nightfall. But I had an important appointment in the afternoon, and anyway those were some ambitious goals again… In any case, I threw some more materials into the pit – knead knead knead – then straw and more water. Knead knead knead. Knead. Noon break plus the appointment. Knead. More straw. Knead. More water. Knead. A little more straw. Knead…

At some time I ruled the mixture not perfect, but definitely good enough. It is very difficult to make a cob mixture as thorough with a digger as you would by feet, but it’s really not a problem. The wonderful thing about cob is that it is such a forgiving, lenient material. And the mixture really is good, not perfect but good, that’s enough. I made some space on the tarp with the sand, patiently lifted everything out with the digger (maaaan that was a LOT!), left the last bits and scrapes in the bit, because by then it was twilight already, covered the cob as best I could so it would keep a while, and then decided not to return the digger after all because I wasn’t comfortable driving it around in semi-darkness. But the cob was mixed and done.

So on the last morning I hopped in the digger, scraped off the lawn until it filled the trailer again (these parts look a LOT more neat and tidy than the ones from Tuesday, AND I was faster as well) – unloading that trailer was someone else’s job ;-) – and returned the mini digger at half past ten, then went home for breakfast. WOOOOOOOW that was one productive week!! 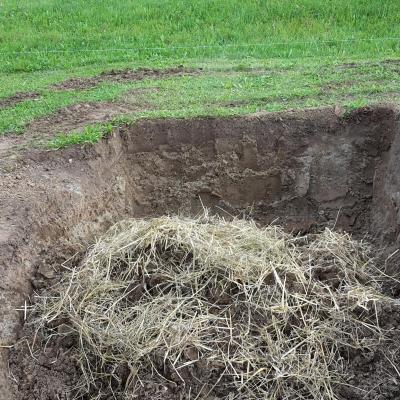 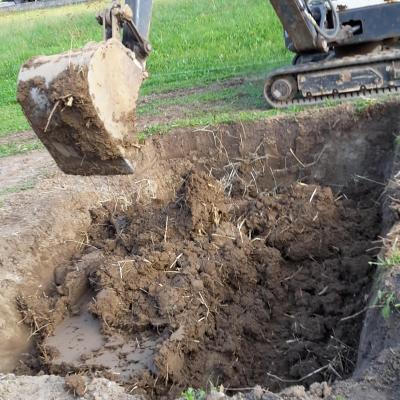 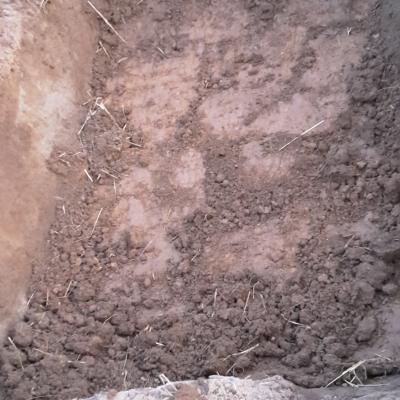 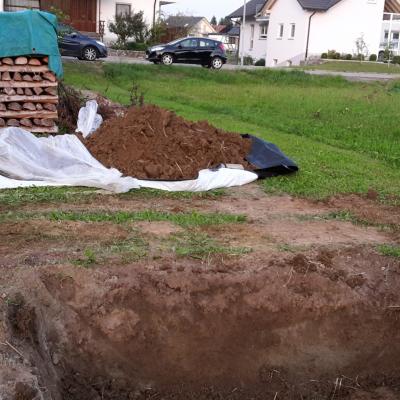 Other things I will keep in mind: