Indeed, the fun never ends. Once again, things didn’t work out as planned, so I learnt a lot and started another round of experiments! As you may remember from my first mushroom post, I had an almost-full mushroom bin and had started another one with leftover bits of mycelium. Well, that second one simply never took off. After two weeks or maybe even longer there was no sign of mycelium growing, there was just this yoghurt bin full of smelly coffee filters. I have a feeling that one was simply too wet, so that just got scrapped. I now drain the coffee filters to “damp” before I put them in a mushroom bin, and that seems to work better.

The other one, the almost full one – well, that started fruiting even before I took it out of the second cover bin. Resulting in a very restrained, tiny little mushroom growing between the two bins, up into the rim. I was of course delighted to discover this and took the cover bin off to give the shrooms some proper space. But alas, what else did I find? Mould, a large patch of green mould somewhere around the mycelium’s midriff. Bugger.

I cut those bits out as best I could, hoping it would recover, and put it in the corner with the vermicompost without the cover bin. A few days later, I was thrilled to find a whole bunch of mushrooms sprouting… out the top. I hadn’t put the lid on tightly, and they’d just pushed it up. Okay! So I cut a part of the lid away and hoped the rest would suffice to keep the humidity level. Well, to cut it short, those shrooms shrivelled, and the mould grew back. BUT – I’ve already started a fresh bin of course! :-) This time I’m taking care to add well-drained coffee filters slowly, with plenty of mycelium (bits that I’m scraping off the dead bin, in places far from the mouldy bit), and only when I can see growth on the older ones. Doing fine so far, so stay tuned for more. 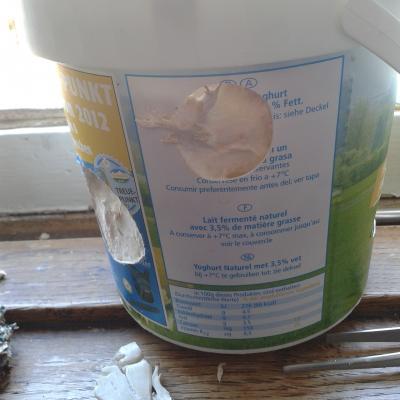 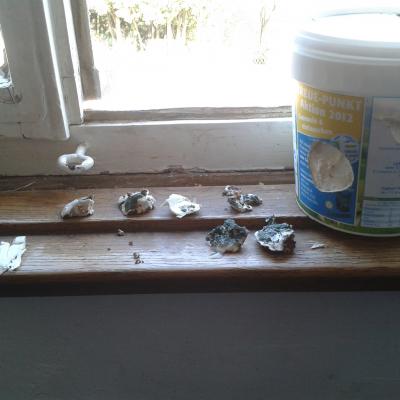 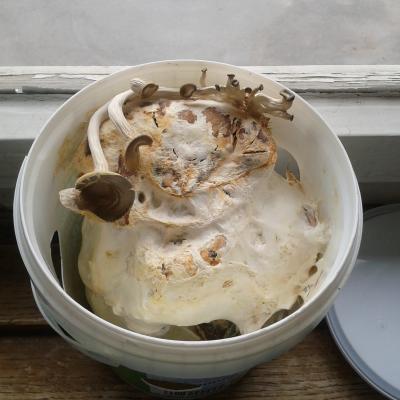 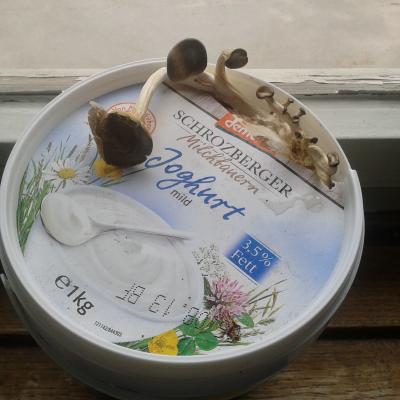 You know, these worms are more fascinating the longer I have them around. Like I said before, they’ve stopped dying on my kitchen floor (yay!) and seemed to have come to terms with their new residence. But something happened that I hadn’t reckoned with at all, which made me uproot the whole vermiculture and turn it completely over: It had begun to grow things.

I wasn’t sure at first what those shoots were, and my SO just said, “well ok, but the day that I find a strangled mouse tied to those plants I’m throwing it all out!”… However, after thinking long and hard I am quite sure that they must be pumpkin shoots. I dimly remember throwing in the seedy insides of a hokkaido pumpkin right at the start somewhere. Meaning they were at the very bottom and had somehow managed to make their way to the only tiny slot of light where the lid was loose. Funky!

Well, as I said that wasn’t planned, but I was still delighted that the vermiculture proved to be such a fertile place. But in the corner of my kitchen, those plants would always be starved for light – I if I wanted them to grow, I would have to move them. So two weeks ago, I spent half a day taking the whole freakin’ mess apart, carefully prying those shoots out, reassembling the vermiculture and putting the shoots (the ones I could rescue, anyway) into four extra yoghurt bins (what would I do without yoghurt bins?!) with some potting soil I’d found in the cellar somewhere. It turned out that the shoots that had made it to the slot and into the light were only about a third of everything that was growing inside that compost. There were so many! I didn’t save all of them, just the biggest and longest. 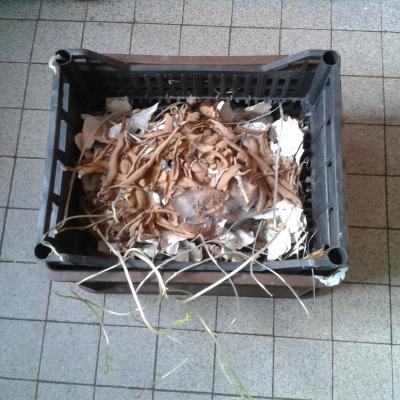 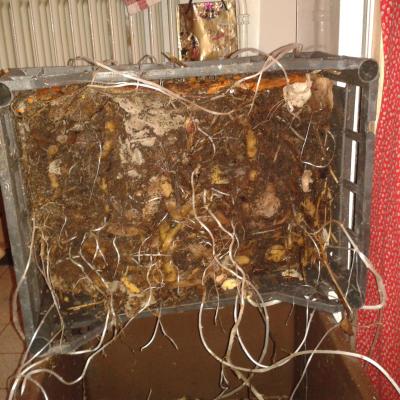 And while I was at it, I was happy to find plenty of worms alive and well, snuggled up somewhere in the lower parts of their box. I realised that my homemade plastic container had too many holes and was too airy, after all. Most of the worms were part of a moist, fairly packed lump of soil and cardboard. I figured that they’d be fine in the box I had so far used as cover, without those holey containers, so I shoved the whole mess in the big brown box, mixed the dry and mouldy parts in a little, and just hoped for the best. I was fully prepared for another round of scraping confused worms off the kitchen floor when I came into the kitchen the next morning, but guess what? There wasn’t a single one. And I haven’t seen tip nor tail of them since.

Something I learnt from a book my mum gave me as a child: 1+1=3. Therefore here is…

Since I had those shoots, I thought I might just as well do something with them and see what happens. I gave three of the four bins to my kids, so they could plant them in the school and kindergarten garden. They’ve done that, but I haven’t checked on them since. However, I kept one of the bins for myself, not really knowing where to put it. It had one gigantic shoot and a few very small ones two weeks ago (see second picture below). The small ones seem to have died, the long one seems to be doing alright (I think I should bury that long, leafless tendril), plus another one has sprouted from nowhere and is growing like wildfire. You can almost sit next to it and watch. Amazing! I love those bits of greenery :-) 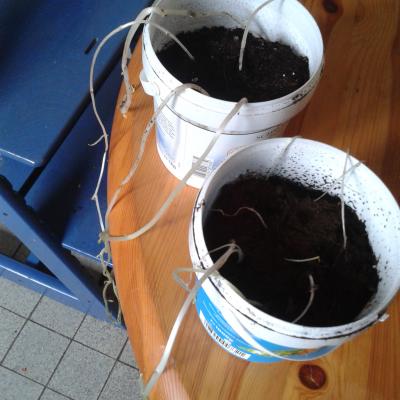 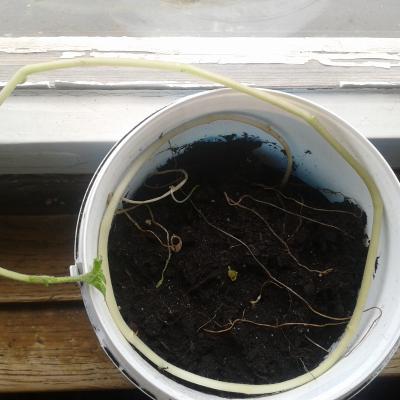 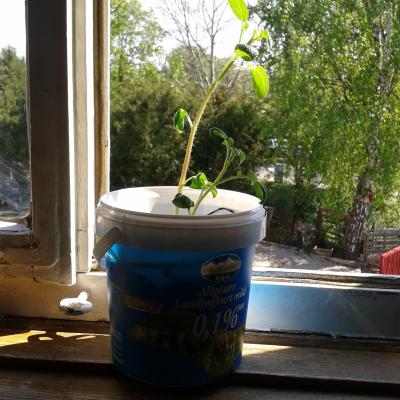 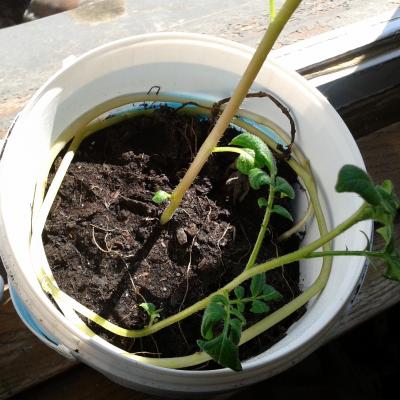 So where the heck do I plant these?! I’ve been thinking to try and build a small hugelkultur (it’s fascinating to see a German word make it into the English language, yay for Sepp Holzer!) bed on the newly-bought plot. I won’t be able to look after it very well though, we’re only moving to that village in the summer holidays. Hmmm… I’ll probably do it anyway, maybe for a Beltane project. We’ll see!