I have lived in an intentional community, in a house with three floors and about twenty inhabitants, for roughly four years, occupying two connected rooms on the first floor with my young daughters and my SO on weekends (we moved after Mio was born). I learned a lot during that time! I learned that I love to live with others – I remember telling people all the time that I was never ever going to live anywhere with less than ten other people or so. And I meant it.

However, by the time we left I was actually willing to move into a flat on the fifth floor of an anonymous, soul-sucking, multi-storey concrete block with just the kids and myself just to get out of there (and what followed were probably the most awful six months of my life). It’s hard for me to make out a single primary reason for this urge to leave as there were a few interrelated factors, but one of them was certainly huge and it had me thinking ever since. 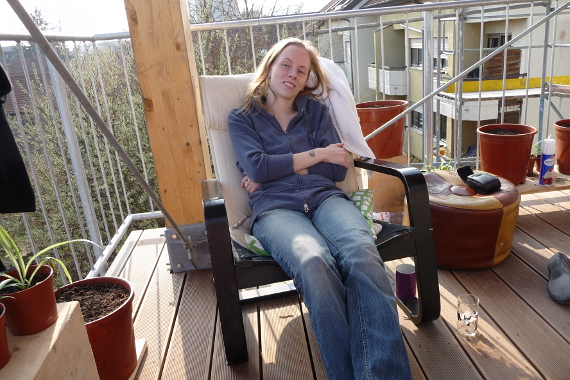 So this was an old, big house with high ceilings and fairly large rooms. Sounds lovely? Yes, it does. Our rooms were medium-sized at about 15 sqm (161 sqft) each, some had 22 sqm (237 sqft). But after living there for two years or so, I came to realise that this wasn’t really such a good thing. Because the communal rooms, which consisted mainly of two kitchens (first and third floor), the ‘living room’ (second floor), three hallways leading up to each of these rooms, and three large balconies attached to each, were about the same size as any individual room (the hallways were larger, but longish corridors).

Reading A Pattern Language, which has several patterns concerning the balance between private and common spaces, gave me much food for thought here, and I came to see how I’d spend much more time in my own rooms than in all of the common rooms together. Partly this was because they did not appeal to me:

But the other part, and I totally see that now, is that our private rooms were big enough for everything, AND I could refashion them whichever way I wanted. They were really nice! Meaning… there was no real need to leave them. On many days (especially towards the end) I would go out to buy some ready-made food and otherwise just stay in our rooms, working on the computer, playing games with the kids, or whatever. Or I’d even have visitors from other rooms (just how absurd is that?). And many of those things I could have done in a cosy common room, along with others, and I would have liked that. But there was no appropriately designed communal room, so I made do with my own space.

I’m sure there’s more to a happy and fulfilling communal life than having suitable living quarters, but I’m equally sure that it just won’t work without them. It’s difficult enough as it is to overcome all our cultural conditioning of individuality and, quite frankly, selfish loneliness.

I absolutely believe that any intentional community needs

What do I need private space for?

That’s a fair question, really. How do I know how much space I need for what? I’ve been trying to figure this out for a long time, and I think I finally got a handle on it. Yay! I posed the question that way around because since community is what I want, that is the default. Any room is a communal space by default. So what do I need private space for, and how much?

I made a list of activities that fill (or that I want to fill) my daily life. Things like cooking and eating, obviously, doing crafts, working on websites, gardening, etc. etc. Then I marked each activity with three different flags:

So for some examples, cooking and eating ranks very highly on the life sustaining scale, and fairly highly on the time scale, and it’s something I’d like to do in company. Working on websites, on the other hand, shall take a small step back in the future, and I’d like to spend only a few hours a week on it; so it gets a medium ranking on the time scale, and a fairly low ranking on the life sustaining scale – because while it does generate a large part of my income, computer work tends to be a drain on my life force and needs to be closely monitored to stay fulfilling and satisfying. And while it’s something I do on my own, I would also love to have company in the office room from people who are working on something else.

Making this list was really, really interesting, and I highly recommend it as a basis for designing your living space! After that I could also easily identify five workstations that I needed (realising that I’m currently missing two of those):

These are the main workstations I need, and only ONE of those needs to be private. The other rooms needed are a living room/sitting space, a kids’ space, a bathroom, some storage rooms, and an entry area. ALL of those are common rooms. So for me, the answer is: four square metres per person should be fine.

The concept of a small private room 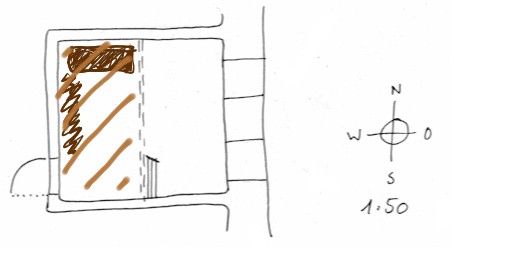 Sounds tiny? Yes, it does! But check out that sketch above. Imagine a (fairly high) room of roughly two by two square metres, with a platform at 2 m height over half of it. That’s the bed (lighter colour). Underneath you can put a dresser and hang some clothes (darker colour), and then fill the rest of the space with whatever you need to keep personal. For me, it would be said spiritual workspace, but maybe for some people a private writing desk would be more important. This is also quite a flexible layout, depending on where your windows are and where you want the door.

The thing is, this space is limited, so you’re forced to make a choice. (Yes, I like the ideas of the tiny houses movement.) And also, if you don’t want to spend most of your time at home at least potentially with some of the other people in your house, why would you want to move into a community? But to be honest, I do feel a little apprehensive about this, due to many years of cultural conditioning. I’m thinking that some of the common rooms will have door signs that can be switched to ‘I just need a little alone time right now, thanks’, e.g. the workshop. Or maybe this isn’t such a good idea, I don’t know. We’ll have to find out. :-)

I’ve done some more thinking on this and discovered a mistake I made: I ended up with the two by two square metres formula because I thought about doing yoga and needing enough space to lie down and stretch out both arms. Now this should be doable on four square metres even for people who aren’t quite as small as I am, BUT it may not work out if this space also contains some kind of wardrobe and an altar or something. So I was inclined to up the scale a bit to 2.50 by 2.50… yet on the other hand :-D I’ve just done some reading on tips for designing tiny homes, and there are some brilliant ideas there. Long story short, this needs some experimenting to figure out, but I still think it’s roughly right. Like, the basic idea still holds.

I’d really appreciate your thoughts on this one! What hobby or other need could somebody have that needs space in the house, but does not fit into my design ideas? I can think of console gaming, and I’m debating that one internally. Can you think of anything else?