My trip to Germany’s first Earthship

Recently I went on a guided tour through Germany’s first Earthship. If you’ve never come across Earthships before, here’s a very short summary:

What is an Earthship?

Earthships are, well, houses. The concept hails from the USA, from the deserts of New Mexico to be exact, and has a history of thirty or fourty years already. Earthships are built largely from waste materials and aim to be completely off-grid, with their own water recycling and energy supply (which makes a lot of sense in the desert). There are several hundred worldwide I think, but only very few in Europe, and so far none in Germany. But an intentional community called Gemeinschaft Schloss Tempelhof (about 220 km from where I live) is now in the process of building one – actually they’re almost done. The inside needs some work, but you can already see and imagine very well where this is going. If you want to know more about Earthships, a quick internet search should help you out. And here are some pictures of Earthships around the world.

An Earthship on the Swabian Alb 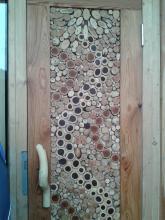 So I went there for a guided tour, and it really is a shame that it’s at least a 2½ hours drive away from here! I’d love to go there regularly just to have a look at the process, and the Tempelhof community seems to have a whole lot of other interesting programmes going as well. But it’s just too far for casual dropping by.

I hardly took any pictures because I was pretty busy listening and thinking about things :-) but there are some videos on the project’s website. Naturally I’d come across the concept of Earthships a while ago already, and I do like much about it.

So far they sound quite perfect to me. However, I’d also come across a few drawbacks online, and my visit made those very clear to me.

So all things considered this just isn’t, hm, natural enough for me. Too much concrete and not breathable, no thank you. But I found it very inspiring to see their consequent passive solar design with my own eyes, and also it was quite interesting to hear which authority vetoed what, and why, and what they could get a permit for and what not. They had to compromise quite a few times, actually I’ve already adjusted myself to that idea as well… but it will still be a long process and it will be interesting to see where the difficulties will be in our case. And that also took a large chunk out of the budget, and that is also very, very good to keep in mind for me. Besides I totally need to give my greenhouse ideas a lot more thought, I realised that this is important to me, and so far our concept is much too vague about it.

So my conclusion is once more: Go out into the world, check out other projects, do some courses, it’s the best thing ever. Even with having to drive more than five hours in one day, that was worth it.