Well well well. It’s been over a month since my last post. Mostly this is due to a very, very busy December – but partly there’s another reason. I need some incubation time.

We’ve been sketching and drawing and measuring and planning since the beginning of November, and I feel this whole process is so exciting that I simply must share some of it with you, right now. There are definitely still a few corners where I need to make some changes, but I do like it a lot already.

Some more thoughts on a solar desiccator/drier

As I said before in my post on the Klimagarten workshops, I am very fascinated by the idea of a solar desiccator. So far I’ve come up with quite a few use cases for it, as well as a sketch with some ideas on improvement.

I just discovered this and I’m radiantly happy with the idea: Compost heating, also known as a Biomeiler! Organic waste + a little maintenance and cultivation = compost or terra preta + biogas + warm water. Brilliant.

This is honestly one of the most enlightening, perception-changing books I’ve ever read. Not only would I press it upon anyone thinking about building a house of their own, I’d also wholeheartedly recommend it to anyone studying any kind of design. 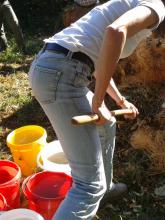 Recently I came across two one-day permaculture workshops, and of course I couldn’t resist: The first was a permaculture starter course with a focus on urban gardening on October 5, the other was a practical course about terra preta on October 19. Both took place in our local climate garden (part of the university’s climate farming research project).

Some of my old plans for the house 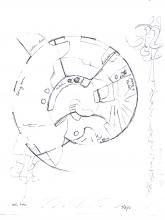 This house has been a long time in the making. Currently I’m in the process of really deciding how many people to plan for – not an easy thing for me to do! On the one hand, I don’t fancy living alone (alone meaning me, my partner, and the kids), but on the other, I need to be able to build this thing in only a few months, weather conditions on the Alb being what they are. 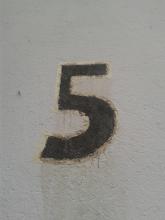 The day after making the moss house number I got the ladder out again, scraped the last bits of moss from the bottom of the measuring cup, and patched a few more places on the five. The sun was shining that day, and even though this part of the wall is in shade for most of the day (ooohh this is so going to take some looking after in summer!), the moss paste was fairly dry. So I brought the paintbrush out and applied the dirt-and-buttermilk soup to the number, wetting it through (and dripping on the wall again, and cleaning it off moderately well again). The whole thing does stick well to the wall, this much I can say. 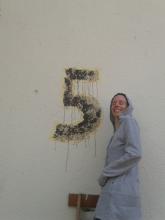 Pinterest brought me the moss graffiti idea… now that really is something that can be done fairly quickly and is super cool. And the house where I’m living right now does not have a number on the front. So a couple of days ago I decided to forage for moss, masking tape and a ladder and try out the simpler of the two recipes I found – it sounded too simple, and I reckoned there’d be plenty to go wrong during implementation.