I’m thrilled to tell you that finally, after more than a year of careful consideration and waiting, we’ve bought that plot! :-D The entry in the land register will probably take another while, but still I dare shout it out into the world and what’s more, post some pictures at last. Though I must say, so far I’ve failed to take good shots. The best ones are from December last year. But then again, there isn’t that much to show! 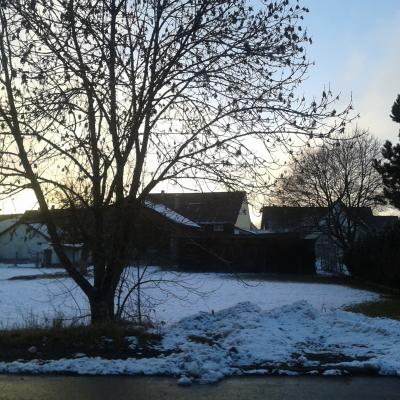 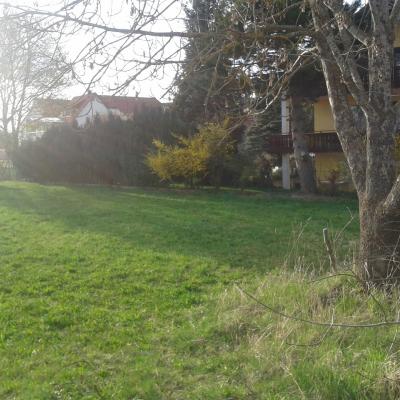 Details (as far as they’re worth mentioning)

Alright, so it’s plain to see this plot is fairly small and fairly unspectacular. It’s very oblong, roughly 17 m × 50 m (east to west), that’s 838 m² or approx. 9020 ft² (or a fifth of an acre). To the east there’s the road, a wonderful large ash tree, and behind that a short downhill slope (the difference in level is about 1 m). To the far side in the west there’s a large shed. Apart from that there’s just grass.

On the southern border there’s another, larger building plot (which couldn’t be had though), I must hope that nobody builds anything on there anytime soon though, that would limit our solar access drastically and spoil all passive solar design intentions. Right, and behind the plot there’s my grandparents’ house, currently being rebuilt, where one of my aunties and my sister and her family live. That’s one massive bonus of course. :-) Besides, it’s right in the middle of the village.

We’re currently stuck on structural engineering questions, more precisely, how exactly to get a building permit for a cob home in seismic zone 3. I do not know the answer to this question yet, but I think this’ll change not too far in the future. ;-) I’m deep in conversation with the experts…

And a little side note: We’ve found an interim flat and are preparing for a move during the summer holidays. That’s keeping me busy too of course, on top of all the planning and drawing and all my little experiments, so I won’t be so foolish as to promise more frequent posts. But I’ll try writing shorter posts… figuring they might not take quite as long maybe?