How to fail your way to success

I actually watched an inspirational video by David The Good recently where his motto basically was, “fail your way to success”. I really like that approach, it’s what I’ve been doing all the time (just not as professionally). It feels so good to have a very successful gardener like David assure me that this is an absolutely valid and effective way of doing things. But another important takeaway from that video and also from my gardening experiences this year is to do it a little differently: keep experimenting, but don’t try so hard. Instead, try a lot: throw seeds everywhere, plant dozens of things, then observe very closely what works and what doesn’t.

I had wanted to buy myself a scythe for my birthday last year, but I was a little late and couldn’t get a place on a scything course. Since I knew absolutely nothing about scythes, I thought I’d better postpone buying one until I knew what to look out for and what to buy. So this year, I made sure very early on that I had a place on a one day course in June, which was super nice and VERY informative! We even did some peening at the end, which really is as difficult as everyone’s been telling me. Fun though. 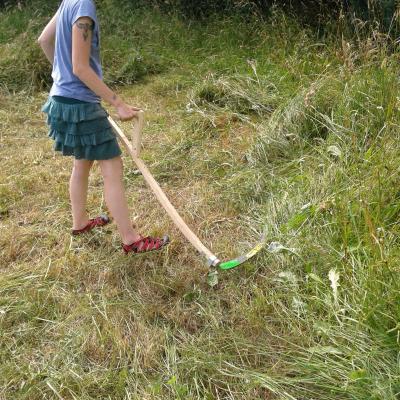 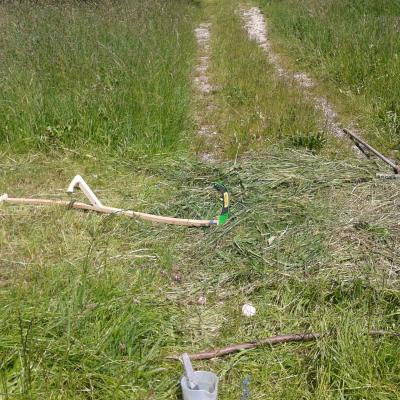 Anyway, I must say it took me quite a while to make my limbs swing that scythe in even vaguely the correct motion. I felt SO stupid, it just didn’t work out. It felt like trying to play the guitar with my feet or something. Both instructors did their best though, I must say, apparently I just needed some time to sort out my various body parts and then practice a lot. Because once I’d bought a scythe of my own (in July, sigh), we were practically inseparable! Honestly, mowing with a scythe is so much fun. I love it. Even when faced with a grassy jungle that had been allowed to grow unchecked for two years, some of the grass on our plot came up to my chin (!), and last year’s stalks were tangled all around the new ones at the bottom. And I’m not even talking about the grove of stinging nettles! Uuugggh. Still, I just love mowing with a scythe.

Heaps and heaps of grass

It took me all summer to mow the whole area just once (I redid some of the areas where I’d started in July, since by September they’d grown back quite a bit again), and this wasn’t even mainly because of the scythe. No, the main thing that made the task so slow was that in most places, after mowing a very very small area of maybe four square metres, the mown grass would get in the way of mowing so much that it had to be hauled away first. And what with all the tangled old grass at the bottom, this often amounted to tearing and ripping and then finding a convenient place to dump a huge mound of grass. And of course, much of the grass was trodden down in odd directions, so yeah, it just took a few weeks. BUT, I’m quite proud that I did manage to mow the whole area, even the stinging nettles! And now that’s been done once, next year will be much easier. I’ll start out early, there will be only a little old grass tanglings in very few places, and I’ll be able to work in rows. 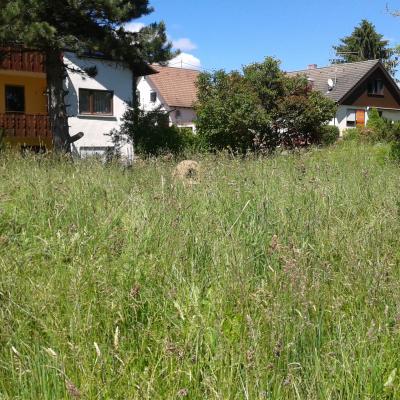 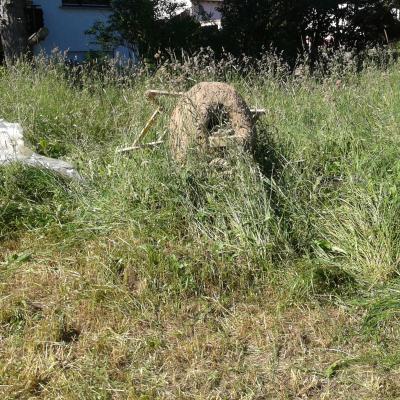 And really, I had no concept of the literal heaps and heaps of grass that I had to get rid of. It was just so much! I did put some on the compost heap, but I soon realised that would only ever accommodate a fraction of what needed to be hauled away. So I borrowed my auntie’s trailer and filled it about, oh I don’t know, eight times maybe?, and took it to our local greenery dump. Which was the best thing ever!! Because people dump whole tree trunks there, and plenty of cool pieces of wood that is up for grabs. Stuff gets borrowed in a giant heap pretty quickly though, so you have to get lucky and find something you can pull out. But I did get some lovely pieces of cherry and alder and others, and I’ll definitely be back in the spring to get some more. 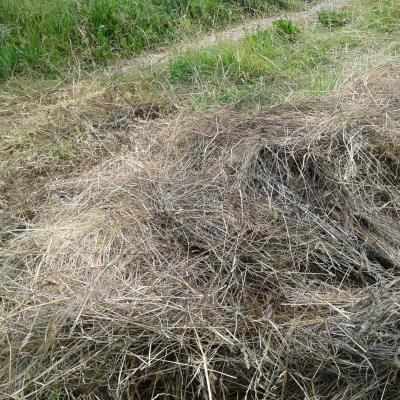 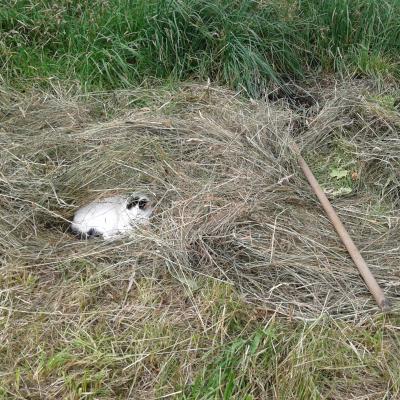 Finding things in the jungle

I was also searching for two things among the grass: the connection lines from the road (water and electricity), and the tiny apple tree I had planted after moving here. Both took me quite a while to dig up! I knew the outlet for the connection lines had to be close to the road somewhere, but I’d never seen it before and didn’t know what it looked like. It’s right by the ash tree and is so overgrown with moss and stuff that I had to look several times before I saw the pipe buried in the cement. And the apple tree was hard to find because while I roughly knew where I’d put it, and I’d put a circle of stones around it to make finding easier, that patch was so overgrown with grass and stinging nettles that absolutely everything was covered. And naturally I couldn’t just clear everything for fear of both cutting down the apple tree shoot and damaging the blade on the stones! Anyway I dug it out in the end. Seems a bit long and spindly to me, I’ll see what experimental care I can throw its way next year (guild plants, mycelia, mulch, compost…). 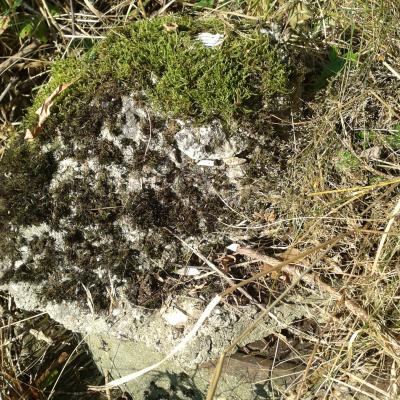 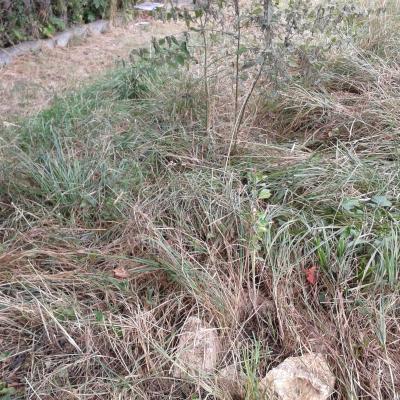 What why how… grain growth?!

The wildest and most unexpected thing I came across while taming the jungle was quite a few clusters of grain – wheat, probably. Where on earth had that come from?! It was nothing like the wild rye that you sometimes find in odd places (you’d see it everywhere in the small city where I used to live), so what the heck? Well actually, those bundles were growing right where I’d tried to make that manure flower bed last year. By the way, I learnt a crucial thing in the scythe course, which is that grass loves fertilised soil, and wildflowers don’t. That explains why a freshly made manure bed was not a good place to put all those flower seeds. Anyway, I’d mulched that field with straw, right? Some of that straw had come out of the old farmhouse where my sister had a major remodelling process going on at the time, and apparently that had contained a few oars. With viable seeds, as it turned out. 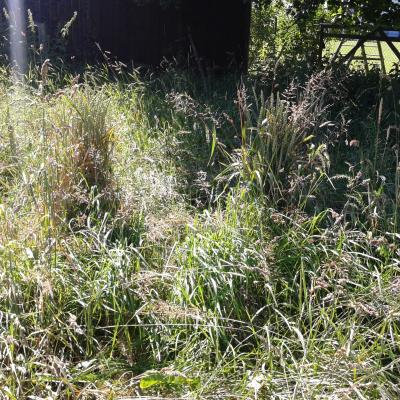 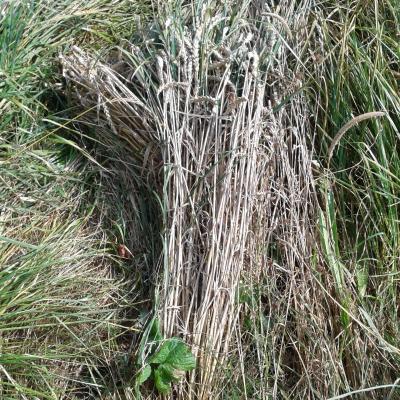 I mean, wow! My guess is that those oars must have been at least a few decades old, possibly sixty years or more? That’s amazing, really. My takeaway is that grains (being a relative to grass) seem to grow really well on manure beds. Interesting. Anyway, I harvested them and intend to save them for a possible landrace gardening experiment – they made a good start already. I’ll need to take a good look at it though; it might be wheat, or spelt, or even a cross.

Last year, I cleared out a stable that had held two goats and hadn’t been mucked out in a while. I used a fair amount of that compacted old manure in last year’s gardening experiments as well as in the compost, but probably a little more than half just got dumped somewhere at the back of our plot. I had intended to incorporate it in the compost throughout this year. Most of it was covered in grassy tufts by the time I got to taking a look at it in July, but I was in for a surprise! I quickly found that I couldn’t hack it up at all for fear of hurting all the worms that came wriggling out. Wow!! The whole mound was just bursting with them. And they had done a good job on the manure already as well. Lesson learned: Dump shit into a biological setting, and it just might get taken care of by the time you get around to looking at it again. 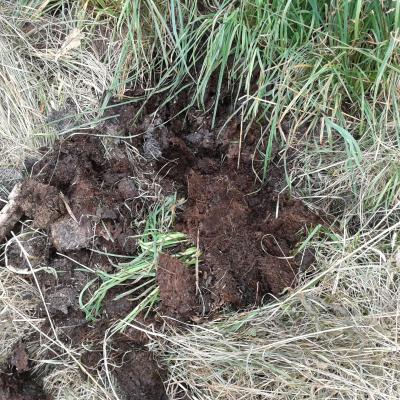 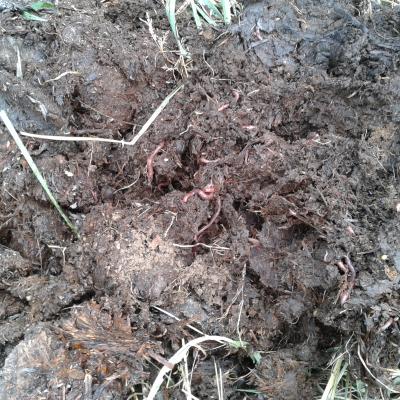 The other thing that turned out wonderful was – as you may have expected – the compost heap. Ever since I’d converted the lasagna bed from 2014 to a compost bin, I’d just been dumping any and all of our organic kitchen scraps there, willy-nilly, in brown paper bags from our groceries. I didn’t rake them in, our turn anything ever, or chop stuff up. Nothing. Just throw bags of waste into that ex-raised bed and forget about them. It never grew too big for the bin even though we kept stuff coming, so I figured it was probably composting alright. All sides had loose boards somewhere around the middle where the pressure was highest and the screws had got loose, and there were lush tufts of grass growing out everywhere. Now in July, while I was at it checking the overgrown manure heap, I decided to unscrew the boards of one side, shift it around a bit, and take a good look at what’s been happening in there. And it was soooo wonderful! 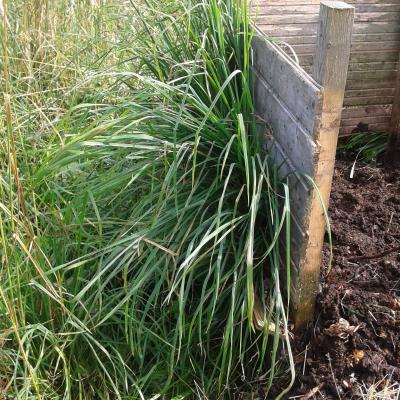 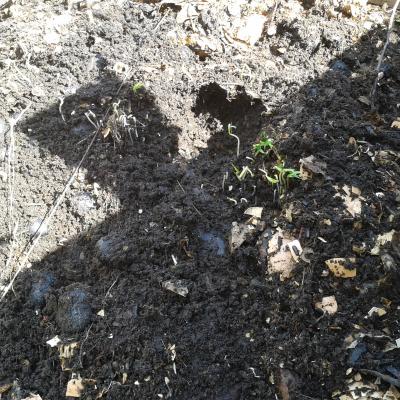 I scraped the top off, there were maybe ten centimetres of fresh, recognisable kitchen scraps, and after that almost nothing but perfect, dark soil, masses of tiny green shoots, and worms aplenty. The only discernible bits I found deeper down were avocado pits (all sprouted), mango pits, avocado peels, some eggshells, and the wood that had gone in the bottom of the lasagna bed. And some tiny bits of banana peels, but not much. No leftovers from any citrus fruit, although we do eat a fair amount of grapefruit and lemons, which I found remarkable. Actually I think the slugs eat those, they seem to love them. Which would mean those pests are more useful than I thought, hum. 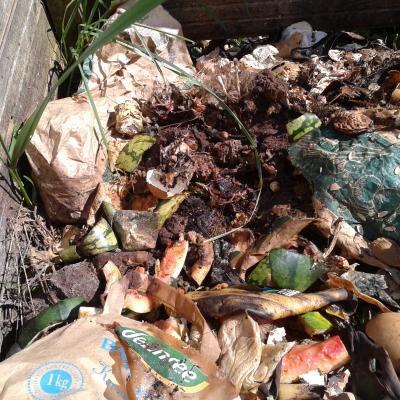 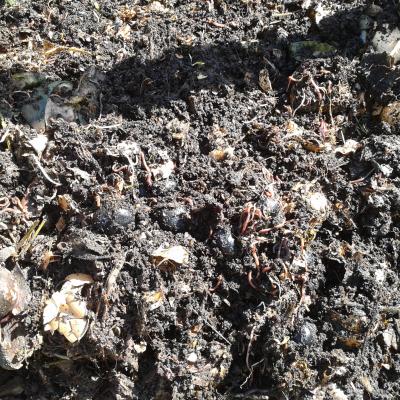 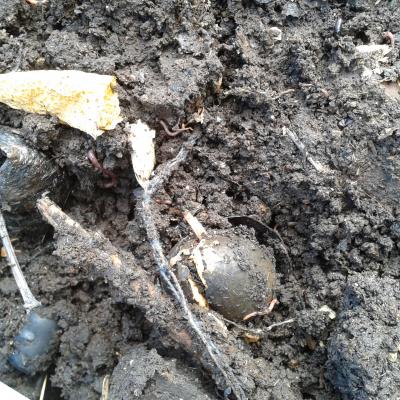 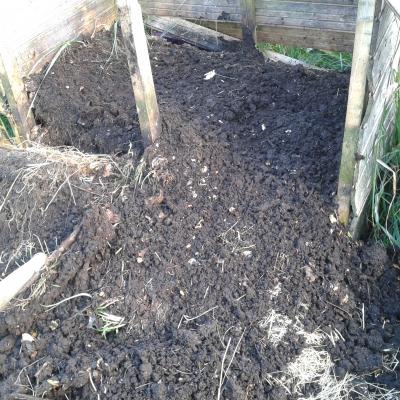 So to recap: Not even trying and still being so successful with my compost has made me feel really good. :-D And from now on, I will try to go about things a little differently: I’ll approach any experiment lightly and on a low-effort basis. Scatter seeds, cobble an insect hotel together quickly, see what happens. But I’ll try to do more things like that, just fit little things in wherever I can. Exciiiiiiiiiiitiiiiiiiiiiing! 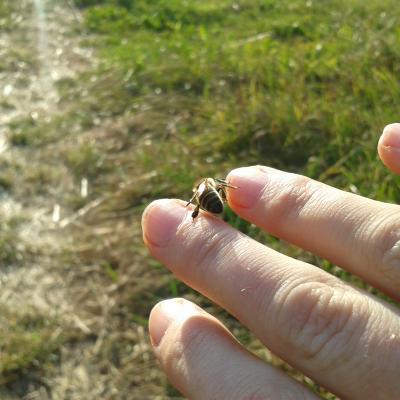 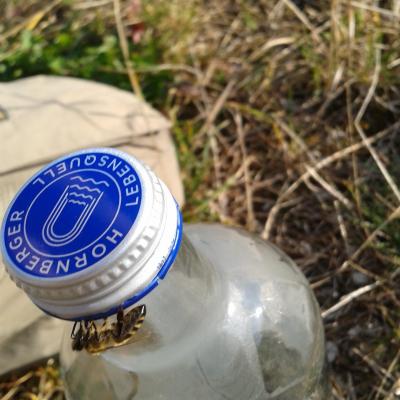