I already mentioned my interest in a bokashi experiment ages ago, and I did get around to trying it. Other things have kept me so busy though that my first bokashi bin is already full by now, so again this will be a longer post.

What IS bokashi, anyway?

That’s a fair question, and I’ll try a short answer which you can easily expand by searching the internet. It’s a different take on biowaste recycling: a two-step process in which you ferment (“pickle”) your organic waste with the help of some anaerobic microbes before you bury it. Why should anyone do it like that, when you can just go ahead and compost it straight away? To be honest, I’m not sure. From what I understand, you keep more nutrients available this way, and I also think it takes less time until you can plant something in it. But really, I’m just keen on checking it out; I can only learn so much by reading. (Says the woman who buys two to five books on any subject she’s interested in!)

To make bokashi, you need a bin with a lid and an in-between lid to keep it in, preferably one with some kind of drainage, and since the leachate is good for your plants, you may want to be able to catch it. You also need organic waste, of course, and to get the fermentation going, you sprinkle in a magic substance called bokashi bran between layers of waste. This magic stuff is often made of bran (but can be other things too), which has already been fermented with a bunch of microbes in water. They’ve got to be the right microbes, obviously. If you buy some, they go by the name of EM (stands for “effective microorganisms”). And then, you need some patience, as always.

Well, I’d read and heard about making bokashi and just felt like having a go, but I also felt this could make for a really nice low-budget project. That meant more experimenting, but I was at it anyway wasn’t I? So I decided to make my own microbial solution, my own bran, and my own bins. I ended up buying some bran, but all the rest cost not one cent.

I researched those beneficial microbes and learnt that there were three kinds needed for bokashi: yeasts, lactic acid bacteria and some purple bacteria. Of course there are ever so many different kids of all these, but I just had a feeling that this must be a lot like making sourdough. I know from experience that there’s all sorts of yeasts and lactic acid thingies in sourdough, so I figured I’d just make some and then thin it down to mix it with the bran. The purple bacteria had me stumped for a while… but for one thing, the internet says it’ll work just with lactic acid bacteria, though not quite as well, and for another, I read up on those microbes and learnt that they can often be found in pond water. So then I grew the sourdough over a week or two, added a glass of pond water to it and just hoped for the best.

I mixed some peanut husks into my bran, since I had them around anyway and I’d read somewhere that this could be used as well. I had a smaller bin which I filled with bran and husks to the brim, then poured the microbial solution over it. And then I switched to a bigger bucket, which was a really good idea. It was a messy business. Here’s some pictures: 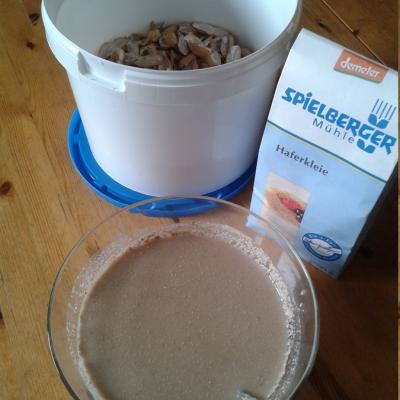 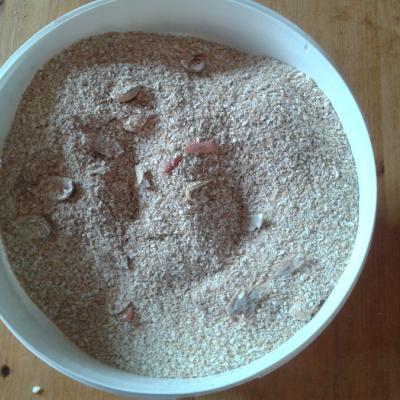 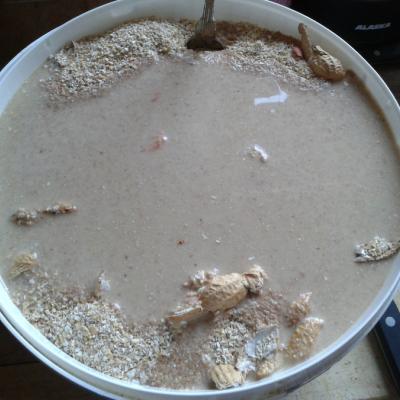 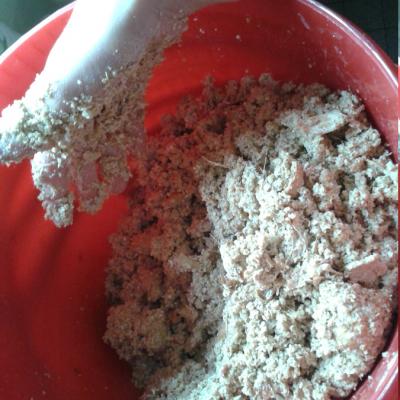 I must say, I’m really pleased with my bokashi bin arrangement. I picked up four 40 l ketchup bins plus three lids from our university’s cafeteria one day (I took Mio along, and everyone was charmed and happy to help), and I had a little tap lying around from a large pack of juice or something. So I pricked holes into the bottom of one bin and cut a hole into another for the tap – making that fit tightly took a bit of work though, I wrapped a bit of white sealing tape around it in the end. I also had a spare cooking pot lid which I thought would fit perfectly to seal the bokashi off, but I discovered that the bins tapered a little to the bottom and the lid only fit perfectly on the top ten centimetres or so. I tried to make do with a plate and a plastic bag then. 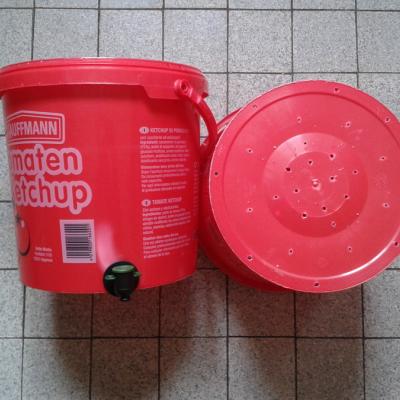 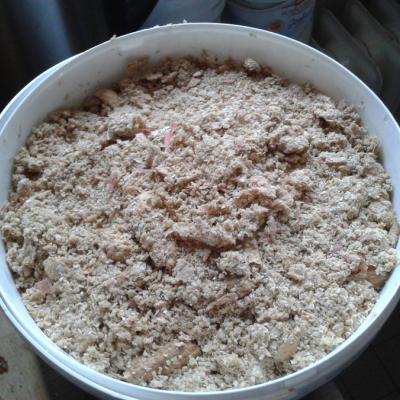 The history so far 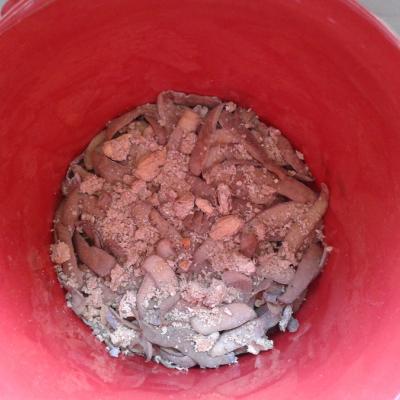 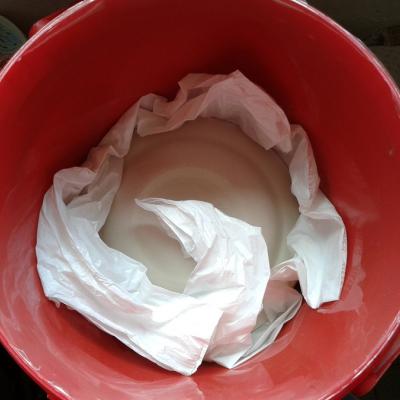 While I really liked the whole process, I did experience some issues with smell. Not a total URGH, but the bokashi smelled just a little rotten when I opened it. Just not right. My homemade bran, on the other hand, smells just as it should: sweetish and yeah, basically much like good sourdough, so I think I probably got that right. Also at some point in the beginning, I got loads of white, thickish fluff on the top – no green or black mold though. I got rid of the fluff by using more bran, and the smell is better now as well. After some experimenting, I also think that I simply need a better in-between lid. The plate with the plastic bag didn’t quite cut it, and now I’m using a thicker sheet of plastic weighed down with big stones. That’s still far from ideal though, I think I’ll check the next jumble sale for an assortment of different-sized lids.

In love with bokashi

Frankly, I love making bokashi! But I’m finding it hard to explain why. Maybe it’s just the thrill of the new experiment. Still, there are some good reasons to like it: